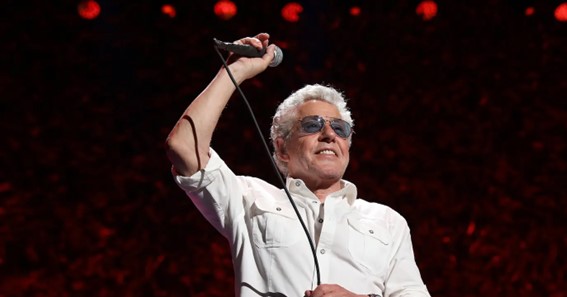 Who Is The Lead Singer Of The Who?

The lead singer of The Who is Roger Harry Daltrey who is also a musician and actor. Roger is also a co-founder of the rock band The Who. Being a member of this rock band, Roger Daltrey received a Lifetime achievement award from the British Phonographic Industry in 1988.

You can keep on reading further to find out how old is Roger Daltrey.

About The Lead Singer Of The Who

Roger was born on 1 March 1944 to Harry and Irene Daltrey. His father Harry was an insurance clerk who was called up to fight in the Second World War. At that time, he left three-month-old Roger and his wife in Scotland.

Roger attended Victoria Primary School and then Acton County Grammer School. Here, he studied with Pete Townshend and John Entwistle. The Who’s lead singer made his first guitar from a block of wood in 1957. Later on, he joined a skiffle band named the Detours which was in the search of a lead singer. The band members told him to bring a guitar and within a few weeks he showed up with it!

In 1959, his father bought him an Epiphone guitar. He went on to become the lead guitarist of the same band. However, he was then expelled from his school for smoking tobacco. His friend Pete even wrote in this autobiography, “until he was expelled Roger had been a good pupil.”

Daltrey was the lead singer of the band and earned a reputation for using his fists to exercise discipline. He often ran things the way he wanted. And if you try to argue with him, you can get a bunch of hard punches!

Being the lead singer of The Who rock band, Daltrey gave several hit songs. This included “My Generation”, “Pinball Wizard”, “Won’t Get Fooled Again”, “You Better You Bet”, and more. The lead singer of the rock band “The Who” started his solo career in 1973. At that time, he was still a member of The Who. He went on to release ten solo studio albums, five compilation albums, and one live album.

In 1964, Daltrey got married to Jacqueline Rickman. Later that year, the couple had their son Simon Daltrey. But they divorced in 1968. In 1967, he was in a relationship with Swedish model Elisabeth Aronsson. Mathias was the result of his affair with Elisabeth. At that time, he met a model named Heather Taylor. They both got married in 1971 and had three children together. His daughters Rosie Lea and Willow Amber and son Jamie run Daltrey’s trout farm outside Burwash Common.

How Many Original Members Are Still In The Who?

Founding members Roger Daltrey and Pete Townshend have been the band’s only constant members throughout its history.

What Song Was The Who’s First Hit?

Does The Who Tour Have An Opening Act?

Mike Campbell and The Dirty Knobs will open the majority of the fall tour dates. Tickets for the newly announced dates go on sale September 1st via Ticketmaster. All other shows are currently on sale and tickets can be purchased here.

Who Is Still Alive From The Who?

As the last surviving members of The Who, Pete Townshend and Roger Daltrey easily qualify as living legends—two veterans of one of the most influential rock bands of all time, credited with everything from helping popularize the synthesizer to the development of the rock opera.