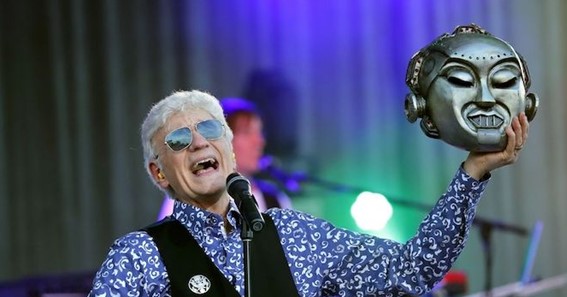 Who Is The Lead Singer Of Styx?

The lead singer of Styx was Dennis DeYoung who is an American musician, singer, songwriter, and record producer. Dennis was the primary lead vocalist while Tommy Roland Shaw was the co-lead vocalist of the rock band.

You can keep on reading to learn more about the former lead singer of Styx.

About The Lead Singer Of Styx

The original lead singer of Styx was the band’s most prolific and successful writer. He has been credited as the writer of more Styx songs than any other band member! Dennis penned seven of the band’s eight Billboard top 10 singles including a solo top 10 single.

Dennis was born in Chicago to Maurice and Loraine DeYoung. He grew up in the Roseland area of Chicago, Illinois, United States. At the age of 15, DeYoung started his career as an accordionist in 1962.  He teamed up with his 13-year-old neighbours Chuck and John Panozzo in a three-piece combo called The Tradewinds. The trio later added guitarist Tom Nardini and renamed the band TW4. Nardin was then replaced by John Curulewski in 1968.

DeYoung also hired James Young to become the second guitarist in TW4. in 1972, the band changed their name to Styx after signing their first record contract. Before the band’s success, DeYoung spent time as a school teacher in the Southern suburbs of Chicago. Over here, he was a music teacher in District 143.

Earlier, DeYoung had crazy hair and would inevitably offer to play the piano for hours. During this time, the band played a number of small venues and school auditoriums in an effort to secure a record deal. The lead singer of Styx Babe met his sweetheart Suzanne when he was 17. The couple then got married in 1970 and have two children daughter Carrie Ann and a son Matthew. Suzzane frequently joined her husband on the road along with her children to provide stability for their family.

Tommy Shaw joined Styx in 1975. His first album with Styx was Crystal Ball followed by The Grand Illusion. His album also featured the radio hit “Fooling Yourself. Styx Grand Illusion’s “Pieces of Eight” was the breakout album for the lead singer Shaw’s songwriting! His song “Sing for the Day” also became a moderate hit. But do you know why did Tommy Shaw leave Styx? Shaw often got frustrated when the tour goes on and on. It was also found that two former bandmates didn’t want to work with him.

After Shaw’s departure from Styx, DeYoung began a solo career of modest success. His first solo album was “Desert Moon” and his first single was “Don’t Wait for Heroes”. Till now, Dessert Moon is the only solo single by any Styx member to hit the Billboard Top 10! DeYoung and other original members of Styx discussed a reunion in 1989.

Now, you must be wondering who is the current lead singer of the band Styx. Lawrence Gowan is the lead singer and keyboardist of Styx for now.

Why Is It Called The Styx?

Styx, in Greek mythology, one of the rivers of the underworld. The word styx literally means “shuddering” and expresses loathing of death. In Homer’s Iliad and Odyssey, the gods swear by the water of the Styx as their most binding oath.

Why Does Styx Not Play Babe In Concert?

“We don’t play ‘Babe’ because that’s kind of Dennis DeYoung’s ode to his wife,” Young said. “And that song was a little too Barry Manilow for my tastes.”

Is Styx Good In Concert?

After rocking fans for 50 years, Styx remains strong. The band appears to be healthy and sounding incredible, the alternating lead vocals split between Gowan and Shaw continue to work well, and both do well in the spotlight.

Does Styx Still Have Original Members?

All those Styx songs were written and sung by the band’s co-founder and former lead singer and keyboardist Dennis DeYoung. Styx still tours today but only includes two band members from their 1975 to 1983 golden era — guitarist-singers Tommy Shaw and James “JY” Young.

Dennis DeYoung is the lead vocalist, musician, songwriter, and record producer of Styx. he was mostly known as the founding member of the rock band. The lead singer of Styx was the band’s most prolific and successful writer.