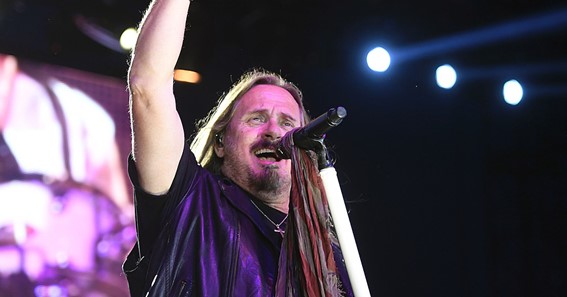 Who Is The Lead Singer Of Lynyrd Skynyrd?

You can keep on reading further to learn more about the original lead singer of Lynyrd Skynyrd.

About The Lead Singer Of Lynyrd Skynyrd

Ronnie was an American singer and was best known as the original vocalist of the band Lynyrd Skynyrd. He was also the primary lyricist and a founding member of the same band. In fact, he is the older brother of the current Lynyrd Skynyrd’s lead singer Johnny Van Zant and Donnie Van Zant. Donnie is the founder and vocalist of the rock band .38 Special.

Ronnie was born to Lacy Austin and Marion Virginia Van Zant. He was raised in Jacksonville Florida. Before finding his love for music, Ronnie aspired to be many things. Being a fan of boxer Muhammad Ali, he considered a career in the ring. However, while playing American Legion baseball, he dreamed of Minor League success.

Do you know how the lead singer of Lynyrd Skynyrd died? In 1977, a plane carrying the band members ran out of fuel outside Gillsburg, Mississippi. All the passengers in the plane were told to brace for a crash. Ronnie died on impact from head injuries suffered after the aircraft struck a tree. His bandmates, Steve Gaines and Cassie Gaines including other passengers were also killed. Some of his bandmates were alive and were seriously injured. Lynyrd Skynyrd’s lead singer’s age of death at that time was 29.

After his death, Johnny is the new lead singer of the band Lynyrd Skynyrd now. He continues to record and perform with them even today. Jonny is a die-hard fan of the Jacksonville Jaguars! He even recorded a video along with the remaining original members of Lynyrd Skynyrd. This video is now played at every Jaguars home game on the EverBank Field video board.

In 2011, Johnny was hospitalized due to complications from previous surgery. It was found that Johnny’s surgical site was infected with cellulitis which required hospitalization and IV/Antibiotic treatment. Later, his body started displaying signs of a staph infection and other symptoms related to the infection. This resulted in a number of scheduled performances being canceled.

Lynyrd Skynyrd drummer Bob Burns helped a lot to form the band in 1964. He was well-known for the famous song Free Bird and Sweet Home Alabama. In 1975, he left the band as he was exhausted from touring and then Artimus Pyle replaced him. After the plane crash, are any original members of Lynyrd Skynyrd still alive? Lynyrd Skynyrd’s guitarist Gary Rossington was the last surviving original member of the band. He sustained injuries to both arms, legs, wrists, ankles, and pelvis in the ill-fated plane crash.

How Many Of The Original Lynyrd Skynyrd Are Still Alive?

Rossington, Van Zandt, and Collins were the only founding members left in the band. Today Gary Rossington is the last surviving member of the original Lynyrd Skynyrd lineup.

Who Is Currently In Lynyrd Skynyrd?

Lynyrd Skynyrd has confirmed a new series of dates for the 2022 edition of the band’s Big Wheels Keep On Turnin’ Tour, which kicks off April 9 with a previously announced performance in Scottsdale, Arizona, as part of the 25th anniversary Arizona Bike Week event.

Who Is Touring With Lynyrd Skynyrd This Year?

What Happened To The Lead Singer Of Lynyrd Skynyrd?

It was 45 years ago when a plane crash claimed the lives of Lynyrd Skynyrd lead singer Ronnie Van Vant and guitarist Steve Gaines, among others